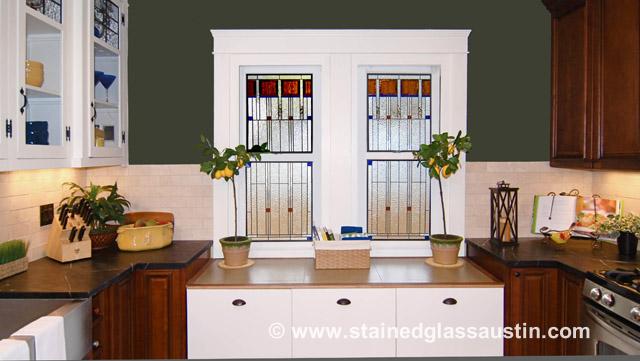 In chronological order, Victorian and Spanish style windows are the oldest stained glass styles seen in Austin although most glass was Victorian because the majority of the early population was Anglo settlers. These early settlers then began installing the more popular Tiffany style windows around the turn of the century.

In more modern suburban neighborhoods, stained glass styles tend to more often be contemporary or modern, meaning that we generally install clear, beveled and textured glass with little or no use of color. While these styles may not be appropriate for every Austin home, they do fit nicely in newer homes where large bathroom windows, transoms, sidelights, and entry doors present privacy and security risks, but look ugly when covered by blinds or drapes.

Whatever style of stained glass you might desire in your Austin home, Scottish Stained Glass is here to help with the design process and uses time tested construction techniques adapted to meet modern construction standards. Contact us today to schedule an in home appointment or learn more about your options.